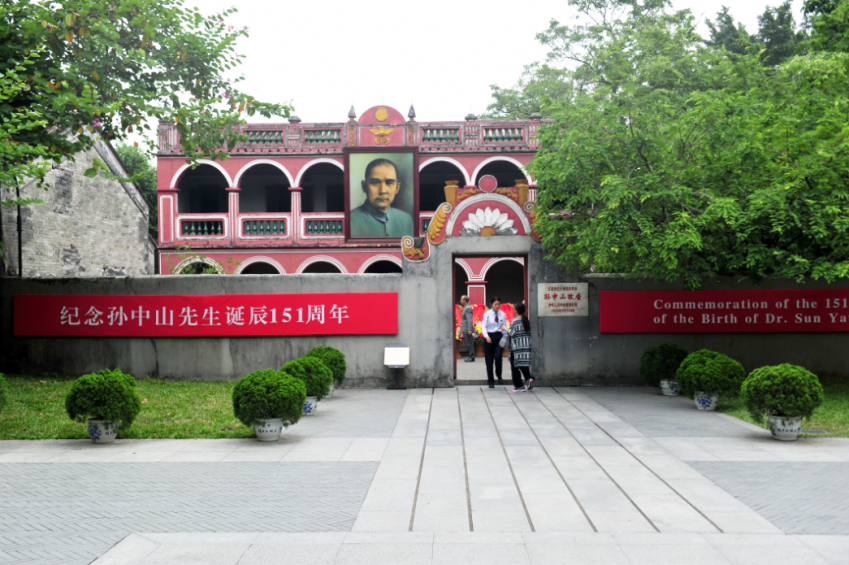 Located in Cuiheng Village, Nanlang Town, the Former Residence of Dr Sun Yat-sen was designated as an important heritage site under state protection. It faces west, covering an area of 500 square meters, with a construction area of 340 square meters. The construction was directed by Sun Yat-sen, with money remitted by his oldest brother Sun Mei from Honolulu in 1892. The house is a two-storey half-timber building integrated with both Chinese and Western styles, with a courtyard surrounded by walls. Its exterior appearance is modeled after the Western architecture. Seven crimson decorative arches are on the upper floor of the building. A shining ring is embedded in the middle of the eaves, with a flying eagle biting a coin carved and painted underneath. The interior design adopts traditional Chinese architecture style. The main hall is in the middle. Two side rooms are lined up on the left and right. As for the tiles attached onto the walls, the grey bricks are decorated with white lines with windows symmetrically under the sill. There are doors in all the four directions leading to the streets. From the starting point, people can follow the path on the left to gradually turn right, and they can finally reach the original place where they set off. A couplet is hung on the main entrance, implying that "With a rafter well placed, a house can be well built and the people can have a better life". It is said that the couplet was written by Sun Yat-sen after the completion of the building. On the right side of the courtyard, there is a well. The surrounding space (about 32 square meters) of the well is the original site of Sun Yat-sen's old house, where he was born on November 12, 1866.

The decoration and furnishings of the main hall was arranged by Sun Yat-sen personally. In 1883, he brought back two kerosene lamps from Honolulu and placed them on the holder. The right-side room served as Sun's bedroom. The large wooden bed, dressing table and stools he used are still put there now. Sun lived here from 1892 to 1895 and in the year of 1912. His study room locates on the southern side of the second floor, with a picture of him at the age of 17 hanging on the wall. Inside the room, there are a writing desk, a table and an iron bed Sun ever used. In the winter of 1893, he once drafted the Letter to Li Hongzhang in the study room, raising his reform proposal of "making the best use of talents". In 1895, he, together with Lu Haodong, discussed about how to save the country in this very room.

On the left side of the courtyard, a tamarind tree was planted. In 1883, Sun brought back the seeds from Honolulu and planted the tree by himself. On the right side, there is a brick flower pond.

Around the former residence, people can trace the hints of Sun Yat-sen's activities in his youth. At the age 7 to 12, he often gathered firewood with his older sister Sun Miao-xi in the Jinbinlang Mountain. On the halfway up the hill, there is an ancient well, from which he usually collected water and took back home. Sun also often caught fish and went swimming in the stream below the hill.

The big banyan tree standing in front of the courtyard was the place young Sun Yat-sen often listened to the stories about the Taiping Heavenly Kingdom told by Feng Shuangguan, an old peasant who once joined the Taiping Army.

Cuiheng Village is about 100 kilometers from Guangzhou to the north and about 30 kilometers from Macao to the south. It faces Shenzhen and Hong Kong with the Pearl River in between, and adjoins Zhuhai City on land.