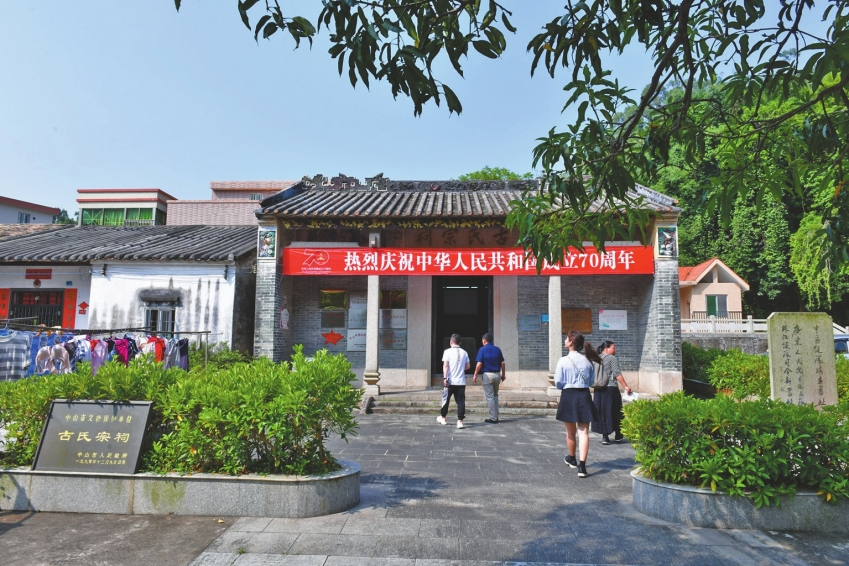 The Gu Family Ancestral Hall, built during the reign of the Daoguang Emperor in the Qing Dynasty, is a cultural relic protection site and a Party history education base of Guangdong Province. [Photo by Sun Junjun]

With the purpose of fully activating and utilizing the rich revolutionary cultural resources of Zhongshan, the theme-based education leading group office of the Zhongshan Municipal Committee of CPC recently launched four "red education" (revolution-themed education) on-site teaching routes, namely the Wuguishan District route for "passing down the spirit of Zhujiang Column of Guangdong Anti-Japanese Guerrilla", the Torch Development Zone route for "passing down the spirit of nationwide Anti-Japanese War", Nanlang Town route for "remembering the deep relationship between the army and the people", and the Sanxiang Town route for "carrying forward the revolutionary spirit in the Anti-Japanese War".

Each route is arranged with one or two teachers from the Party School of the Zhongshan Municipal Committee of CPC as on-site instructor(s).

According to the director of the Party History Research Office of Zhongshan Municipal Committee of CPC, there are more than 100 red revolutionary sites in Zhongshan, which cover the period of the Great Revolution, the Anti-Japanese War and the War of Liberation. The four newly selected routes not only reflect the characteristics of the red revolution, but also incorporate the elements of ecological environment protection and rural revitalization to build connection between history and reality.