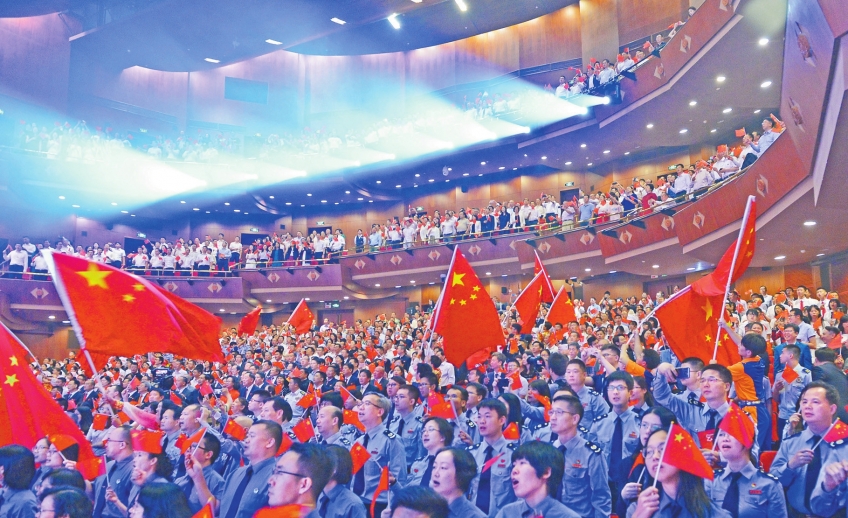 Under the theme "70 Years of Struggle for a New Era", Zhongshan held a culture show on September 29 to celebrate the 70th Anniversary of the Founding of the People's Republic of China at the Zhongshan Culture & Art Center. [Photo by Xia Shengquan]

This  event was attended by more than 1,000 people, including municipal leaders and staff from government units, Zhongshan folks from Hong Kong, Macao and overseas, and representatives from the public.

The show had four main parts: "Ardent Xiangshan", "Warm Spring Qijiang", "Dream in Greater Bay Area" and "Voice of the Times". It reviewed the brilliant achievements of the people of Zhongshan in the course of 70 years since the founding of New China. It also eulogized Zhongshan people, under the leadership of the Communist Party of China, not fearing hardships, standing up to the tide, and striving to create a happy life.

According to Wang Di, Director-in-Chief, the show took more than three months for its preparation. It included local original programs as well as performances and creative work by the Pearl River Film Symphony Orchestra, Guangdong Dance and Drama College, renowned musicians and screenwriters.

"The songs and dances at the show were arranged in accordance with the development process of the times, and the display of folk customs such as dragon boat drums and salty water songs made Zhongshan attractive on the stage," said Yeung Hoi-shan, member of the Zhongshan Standing Committee of the CPPCC and Chairman of the Federation of Hong Kong Zhongshan Community Organisations.

Leong Kin-ian, a Zhongshan native in Macao, praised the choreography and emotional performance. As President of the Zhongshan Overseas Youths Association, he said that,"I will continue to contribute to the strengthening of friendship and exchanges between Zhongshan and Macao."