Renowned Zhongshan sprinter Su Bingtian, who made remarkable achievements in the Tokyo Olympics and the 14th National Games, returned to his hometown on October 12.

A simple but grand welcome meeting was held on the day. Lai Zehua, secretary of the Zhongshan Municipal Party Committee, and Xiao Zhanxin, Zhongshan mayor, met with Su Bingtian and issued him a letter of appointment to serve as the city image ambassador of Zhongshan in recognition of his outstanding performance.

Lai Zehua hoped that Su Bingtian could be a good ambassador for Zhongshan, showcase Zhongshan's beauty in the New Era to Guangdong, the Greater Bay Area, China and the whole world, take the lead in publicizing and introducing Zhongshan, and tell fascinating stories of his hometown.

"It's great to be home," says Su, adding that he feels happy and proud to be a native of Zhongshan. He will continue to spread positive sentiment for the hometown of great man Sun Yat-sen.

During the meeting, attendees watched the documentary "Growth of Su Bingtian" together. Su also presented a national team suit with his signature as a gift to Zhongshan. 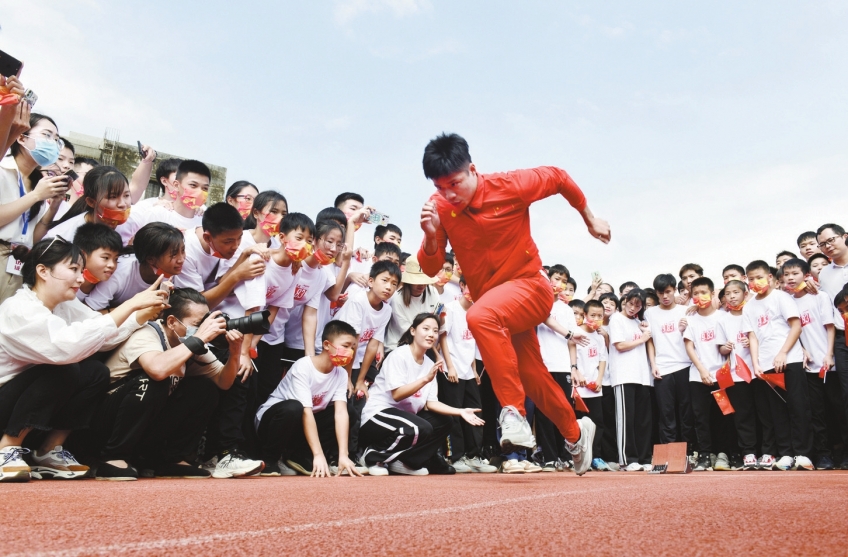 That morning, he also visited Zhongshan Sports School, his alma mater, where he demonstrated fundamental sprinting techniques to students and encouraged them to work hard.